The corona effect is a phenomenon of partial electrical discharge caused by the ionization of the air surrounding a conductor. It appears when the voltage exceeds a critical value, but whose conditions do not allow the formation of an electric arc. A corona effect produces a glow of bluely light, which forms around the cables carrying high voltage current, more frequently on aerial power lines.

A corona discharge occurs when a direct or alternating current is created between two electrodes brought to a high potential and separated by a neutral fluid like air, by ionization of this fluid. A plasma is then created and the electric charges propagate by passing from the ions to the molecules of neutral gases.

When the electric field at a point of the fluid is large enough, the fluid ionizes around this point and becomes conductive. If the fluid is air, the ionization is responsible for the bluely light emitted.

In particular, if a charged object has points or corners, the electric field will be greater there than elsewhere leading to a corona discharge: the phenomenon will tend to stabilize itself since the ionized region becoming conductive, the tip will apparently tend to disappear. The charged particles then dissipate under the effect of the electric force and are neutralized on contact with an object of opposite charge. Corona discharges therefore generally occur between an electrode with a small radius of curvature, such as a defect in the conductor forming a point, and a another with a large radius of curvature such as a metal plate or the ground.

If the geometry of the conductor and the value of the field are such that the ionized region expands instead of stabilizing, the current may eventually find a path to the reverse electrode and creates sparks or electric arc. 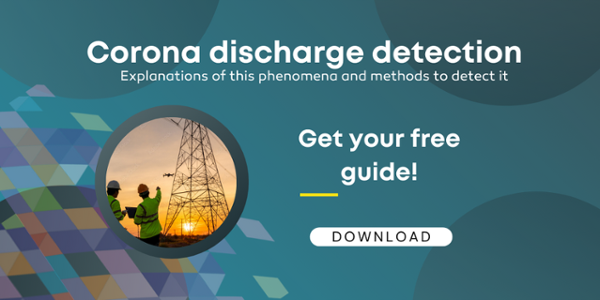 The corona effect depends on the superficial electric field of the conductor, but also on its diameter, its surface condition and then the density and humidity of the surrounding air. Indeed, when it is raining or under very humid conditions1, an aerial power line starts to vibrate at the natural frequency of the conductor in light winds on high voltage lines when drops of water are suspended under the conductors in rainy, wet snow or heavy fog2 or the presence of drops of water suspended on the underside of a cable3; the intermittent presence of the space charge4,5,6 and of the ionic wind located in the immediate vicinity of the drops of water suspended from the conductor are the main causes of this phenomenon2, the magnitude and location of which will depend on several parameters such as value and polarity of the electric field on the surface of the conductor, intensity of precipitation, speed of the transverse wind2,7.

This effect is not desired on power lines since it causes power loss for the network. In addition to unpleasant crackles emitted by that phenomenon, the corona effect can interfere with radio and television signals. It also creates vibration on the power lines, which, combined with vibrations due to wind8, reduces the lifetime of power lines, accelerating aging of the conductor and wear of its anchor points and leading to an inevitable and more important corona effect. Dioxygen in the air is also transformed into ozone, which is a harmful gas for exposed animals living nearby.

1 M.Farzaneh, "Effects of the intensity of precipitation and transverse wind on the corona induced vibration of HV conductors", IEEE, Vol. 7, No. 2, April 1992